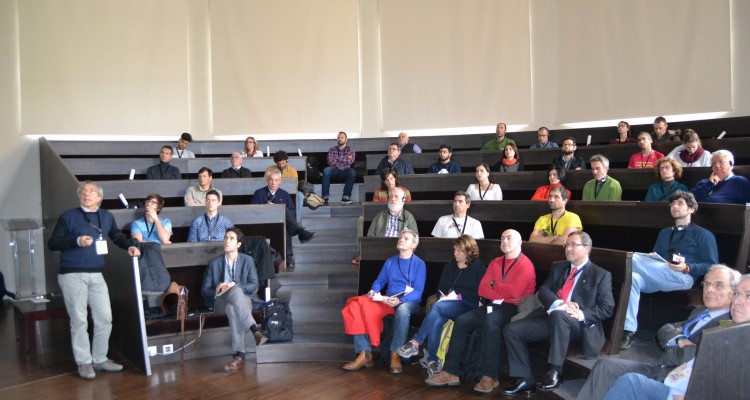 Competition, hiking and other organizations active in the mountains

Three of the mountaineering challenges being addressed in CIMA, International Mountain Congress held in Zaragoza, are competing in mountain sports, hiking and organizations active in the mountains. These three issues have shaped paths roundtables were held in parallel with Spanish and international speakers.

Sceni Angelo, director of ARCO, Marco Maria Scolaris, president of the International Federation of Climbing, ISFC (Italy), Carmen Arnaudas, the Spanish Agency for Health Protection in Sport (AEPSAD) and Albert Balcells, organizing sports events in the natural environment have been participants of the round table ‘Competition in mountain sports’, one of the stars of the morning on the first day of Congress. Moderation of the debate has been borne by Lluís Giner, technical director FEDME.

One of the main ideas that has flown over the table was that of respect for the environment, whether or not athletes in competition. This was stated by the president of the IFSC, Marco Maria Scolaris, who has made a commitment mountaineering respecting the environment. “There is a strong presence by climbing sports centers, a practice that can be performed on the mountain but for which certain skills, training and environmental awareness are necessary when we went out.”

So Scolaris compared with swimming mountaineering: this can be practiced at sea but compete in swimming pools. When a sports center is saturated, we build another. And that’s something we can not see in sports and nature.

Hiking , between tradition and modernity

Antonio Turmo, director FEDME hiking, explained that hiking in the mountain environment in Spain falls to 99% of practicing this sport, reaching from childhood to old age. Moreover, the activity exceeds the sports world as it extends to the tourism sector in most regions. This relationship has a direct impact on the territory, for the enhancement of heritage, knowledge of nature and economically, with tourist accommodation. In this sense, at the table noted the importance of the trails pass near lodges and campsites, as the economic impact is direct for these areas.

During the discussion, participants also emphasized that, in some cases, as in the Camino de Santiago, there are walkers who do not consider themselves athletes and, at the time of initiating a pilgrimage to these features, not available sufficient training to address these tours. An example is choosing the right footwear for these practices.

Vicente Zapata, member of the Scientific Advisory Board of Mountains, explained the work that has been done in rehabilitating trails with interpretive Canary support on heritage and nature, so that it has managed to compose a very attractive product from the tourism point of view. Zapata has insisted also on the importance of promoting hiking in the family, since the activity is able to work for the inclusion of different generations in sports.

Other organizations active in the mountains

Fernando Caro, the Aragonese Federation of Speleology, referred in relation to the main theme of the congress, mountaineering challenges in the XXI century, “with globalization, have opened new horizons in remote locations that are becoming harder for its exotic and adventurous attraction. ” He also commented that access to information has allowed pooling international teams that allow expeditions before fancied impossible.

Victor Tarodo, vice president of International Mountain BicyclingAssociation in Spain, has paid special attention to the importance of mountain roads. Most importantly, he said, is to keep the roads, since in recent years are missing. Tarodo concluded his presentation by adding that “the road is essential and none of this would be possible without roads.”

José Samper, technical director of the Spanish federation of orientation, has affected the objectives and challenges of the XXI century guidance in making clear that the important and fundamental is “working to implement the guidance in Spain as a cross-cutting issue”. In addition, on the issue of health, Samper said that “guidance serves to sports almost inadvertently as accurately activity.”