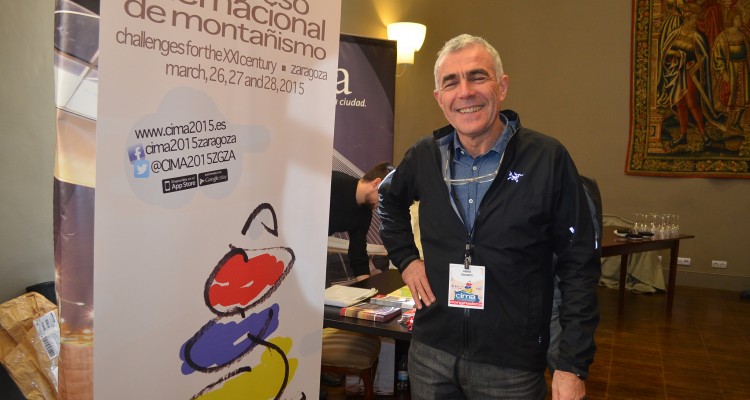 - You have practically become a legend as the father of skyrunning. Could you tell the course of the organization and development of the sport?

– We come from mountaineering, not from athletics. We had to train hard to be able to reach the 8,000m and then started running in the mountains. We liked it and started achieving records at altitudes of 4,000m at mounts such as the Bianco, the Rosa or Gran Paradiso. Then we decided to open up to more people, , for example, to climbers and alpine skiers and in 1995 the first federation was founded. It would be reconstituted after the increase of the races, in 2008.

-In the roundtable it has been stressed that there is a real desire to be identified as a mountain sport and not as another form of athletics.

– When years ago there weren’t races like the trail-running, the vertical and other current races, we were practising on real mountain – N. T .: that’s how Giacometti refers to high altitude mountains- and although we have included other most popular formats of races, we have always remained in the mountain and there weren’t any problems of identity. Today it seems that running in the desert, on the hill or the mountain is the same, when they are different environments, we move in very high places and athletics should remain in their proper place. This is not a matter of jealousy, but because of the fact that they are disciplines that require very different organization strategies, formation and specialized training. Fortunately, in Spain there federations as the Aragonese mountaineering, there is a deep sensitivity towards this environment, but that does not happen in all countries. Being included in the Olympics is another question: for that you must adapt your sport to the Olympic Committee demands.The Ski modality should be included in the tourist resort, we must take care of the vertical. What remains ahead is a whole mountain to ascend, but we’re willing to achieve it.

- Do you think you there can be a division between the desire to enter the Olympic sport and the initial philosophy of skyrunning?

– I believe and hope that this will not happen. First, we will acquire the Olympic format and safety requirements for all those competitions which want to enter as an Olympic discipline. On the other hand, we’ll have our own mountain Olympics arranged otherwise. Just as there are also summer Olympics, the winter ones or the olimpics for people with disabilities.

- So, can we say that you don’t see any reason why following the Olympic regulations would restrict this wild original spirit associated with skyrunners?

– No, because two things are given from the Olympic committee: one, recognition as a sport, which can cover all types of racing. Subsequently, into the Olympics will only come those that can be actually carried out in a manner which is, not safer, but adjusted to certain questions of quantity or display of resources, such as vertical or indoor version skyscrapers.