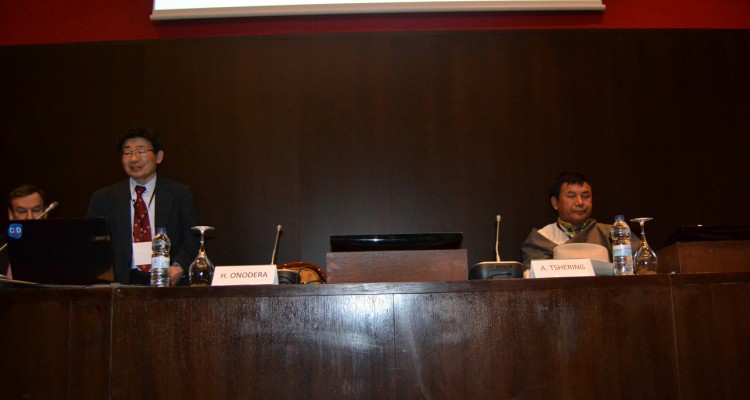 A constant in the 2015 CIMA is the concern for the conduct of all mountain activities within a framework of respect for nature. At the roundtable that closed the second day, these issues were addressed in the context of high Asian summits greater international appeal, such as Mount Fuji Japanese -of hand Hitoshi Onodera, head of Environment of the JNP (Japanese federation Mountaineering) -and Everest and surrounding – with former sherpa who is currently leading a company of this guild, Ang Tshering. In these areas, the problem also takes on concerns of a spiritual kind, since beliefs so widespread as Japanese Shinto consider landscape features are gods, and mountains as points closer to heaven, often associated with the creation of the universe. Westerners call Everest alone to the mountain to the Nepalese, is Sagarmatha, goddess of the sky, and for Tibetans, Chomolugma, goddess of the universe. Mount Fuji is the goddess Sama Segen, and is believed to live on its summit an invisible deity creator of the universe: Kunitokotachi, Lord of Eternal Earth.

Both presentations highlighted the outrageous amounts of garbage collecting expeditions cleaning of Fuji and Everest mountains and of the surrounding peaks biggest sporting interest. Expeditions in which participants the lives of thousands of meters are played and this is a fact that the speakers want to emphasize that increase public awareness.

Other measures taken by both countries to conserve the natural environment have been such as implantation, or restoration, in the case of Japan ecological latrines.

Hitoshi Onodera said that “voluntary donation” that allows climbing Mount Fuji sixth last season, is 1000 Japanese yen to be paid in the fifth and be spent on tasks and materials conservation area. Disabled and children, however, can bring the figure to consider they can afford.