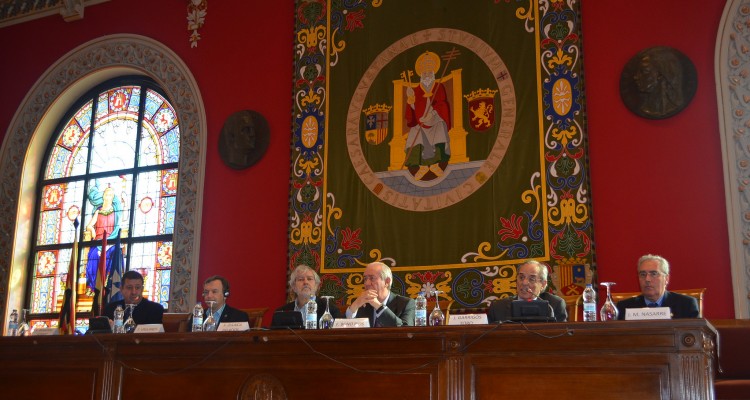 Zaragoza. 26.03.15.-The auditorium of the University of Zaragoza is today and throughout the weekend the international reference space to discuss the challenges of mountaineering in the XXI century. Seventy speakers from various corners of the planet, 54 communications and more than 300 attendees participating in the CIMA, International Congress of the Mountain, organized by the Spanish Federation of Mountaineering and Climbing (FEDME) together with the Aragonese Mountaineering Federation ( FAM) in collaboration with the Government of Aragon and the University of Zaragoza.
The Minister of Economy and Employment of the Government of Aragon and declared mountaineer, Francisco Bono, inaugurated “this international and unique event, which makes the Aragon and the city of Zaragoza in a framework for discussion and debate on important issues such as hiking, rural development, education, health or safety mountain in it. ”
The Minister stressed the role of the mountaineering in the Aragonese economy, amounting to 8%, a very high percentage. He stressed that Aragon has a forest cover of 60% and that there are mechanisms balance between development and conservation of the natural environment would be a mistake to ignore them in the short term. Finally Bono also highlighted the weight of active tourism in our community.
The opening ceremony was attended by the Dutch Frits Vrijandt, president of the International Union of Associations of Mountaineering (UIAA) showed its charm and satisfaction for participating in this conference on “the beautiful city of Zaragoza.” Frits Vrijandt has referred a mountain athletes as “one big family that extends throughout the world, such is the camaraderie between them.”
For the president of the UIAA Mountaineering objective is “to enjoy the beauty of the mountains, environmentally sustainable and safe for the mountaineer way.” For this considered vital to create more protected mountain areas, “which means not close to the public, but to create an awareness of environmental friendliness that allows these activities carefully.” It has also highlighted train youth “to be in contact with nature in these environmental values ​​and norms of self-protection”.
For his part, President of the FEDME, Joan Garrigós, has indicated that the purpose of this conference is to address the challenges of mountaineering in the XXI century and find the way to go. “Institutions, clubs and associations have an obligation to catch up because society is changing very fast. We have to meet the needs of our members and federated with the maximum safety and the highest technical level. ”
He also reminded the aspiration of some forms of competition like climbing and backcountry skiing to be considered Olympic. The presidents of these international federations are present in CIMA, along with other groups.
Meanwhile, Luis Masgrau, president of the Aragonese Mountaineering Federation, thanked the support of the authorities and Congress has justified this congress because “the mountain has changed a lot in recent decades and we must adapt to these challenges. “The Barbastro showed their desire for success and predicts that given the level of the speakers and the content of the conference” this conference will be a milestone and a reference for international mountaineering. “