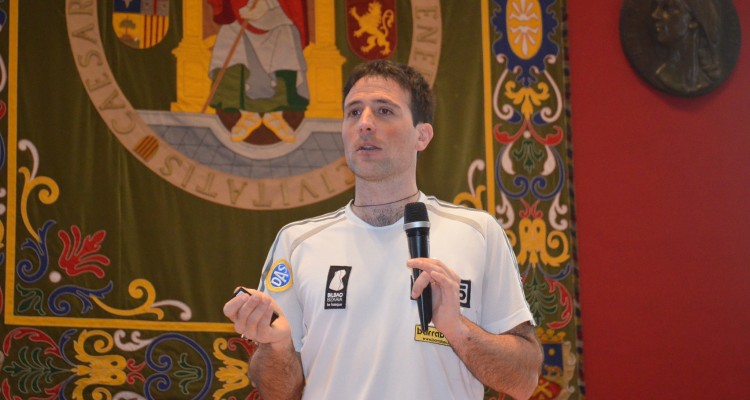 The advantages and disadvantages of a winter expedition

The committee CIMA 2015 ‘Challenges of mountaineering in the XXI Century’ this morning to one of the most anticipated speakers in the conference, Alex Txicón, and Himalayan mountaineer premier specialist in expeditions in Antarctica and extremely difficult routes as those in the Anapurna or one of his latest adventure, the Kangchenjunga (8.586m) to British North Face route. The committee members have wanted Txicón CIMA has been present at this meeting because “their goals are the theme of this project: the challenges of mountaineering in the XXI century”.
Fresh from his last expedition of Nanga Parbat this winter, Txicón wanted to put on the table the pluses and minuses of a winter expedition. On March 16 he left the base camp, a place that had been his home for two months. After two days of walking, a long stretch jeep and another tour bus, and Himalayan mountaineer was back in Islamabad.
To address “the pluses and minuses” of a winter expedition, the climber is based on their personal experiences. He explained one of the routes that will more marked. In 2004-2005, he left the television, specifically the “Al filo de lo imposible” and embarked on a path of 90 days away from home, and 60 in base camp at 5700 meters, temperatures and difficult conditions , instead of the usual eight days of activity and 35 in total. “That’s really the himalayismo” he says.
With over 10 years in mountains 8,000 meters, the climber emphasizes one aspect that must be taken into account more athletes on expeditions: the time spent at Base Camp. “When you get there you can not waste time and then you go out with everything ready, ready for anything”. He adds: “Only in 25% of cases you end ascents but the important thing is to remain alive. Safety is most important, make sure himself. ”
Profitable mountaineering
But how expeditions pay for themselves? The question, “complicated” as Txicon, is to make an affordable summit. And gives an example: a mountain 8,000 meters, with sponsors for financial support, a normal route, fixed ropes and 15 days to reach the summit. The experience, technique and knowledge to their advantage. The force, with 33, also helps. And compared to football: “We must capitalize the little money there and move it either because they are handled atrocities”.