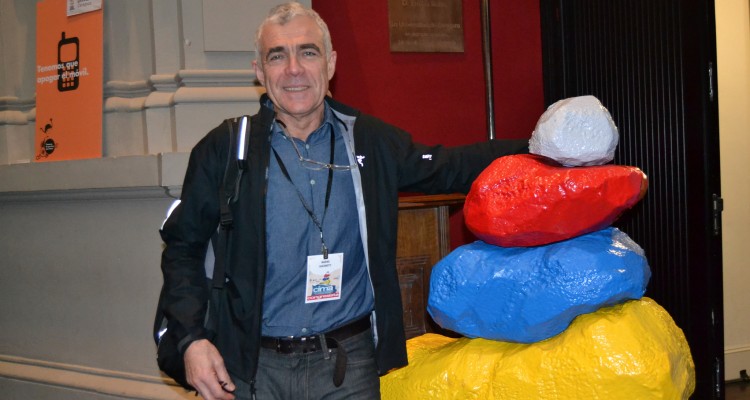 The rise of skyrunning, safety and impact on the natural environment for discussion at the second day of CIMA

Zaragoza. 27.03.15- The evolution of mountain races in the last 25 years that have gone from being a minority sport to a boom extradeportivo has been analyzed on the opening day of the second day of CIMA, among other issues addressed as safety in the mountains, sports equipment, training, weather or the possibility of including as Olympians climbing and backcountry skiing sports.

The president of the Association of Mountain Racing UK and a member of the Committee on Communication and Image of the ISF (International Federation of mountain races or ‘skyrunning’ Ian Corless, discussed at the conference opening the path of this sport “that some think is recent and born in 2012 when has over twenty years.”

Skyrunning The concept has been around a long time but only became something official in the 90s, when the Italian Marino Giacometti amounted in 1989 the peak of Monte Rosso and ran. “Giacometti formalized something that already existed and that a new sport was created when the land meets the sky, simply run has been performed for a long time in the mountains,” said Corless. Officially skyrunnig history begins in 1992 with the first career in the Alps in Chamonix, was the first event of extreme sports. “It’s been a long time since I started skyrunning, and the Transvulcania has been an evolution,” Corless stated.

“Today worldwide there are 600,000 athletes from 65 countries, is a big sport and growing, we have national, continental and world championships. This sport creates an incredible passion, from first to last all are ‘skyrunners’ and we can see her tears, her passion, something like in other sports, but it gives us something more, “said Corless.

Skyrunnig global competitions are organized in three modes: Vertical (1,000 meters sprints but very hilly), skyrunning (mountain races lasting 5 hours) and ultras (mountain races over 6 hours). All these modalities are articulated in the World Series and brokers must collect points for every continent. In these tests reach 30,000 athletes participating.

In economic data, these tests generate a profit of $ 375,000 for the federation, is allocated $ 200,000 in travel expenses and accommodation to attract riders; spread over 125.00 dollars in prizes and $ 25,000 at exclusive prices for the World Series. “This way, athletes can make a living running these tests,” stated the British.

The world champion Skyrunning, Kilian Jornet Catalan unable to attend in person to CIMA as it is in the preparations for a carrea trails, however the figure itself was present in the film ‘Fast and light’. In this documentary Kilian Jornet both as the world champion Emelie Forsberg, and other prominent athletes skyrunnig give their views on the sport. Kilian Jornet is clear that the skyrunning “is not athletics is pure mountaineering. A mountain has no roads between glaciers, has ferrata. It’s not a race against yourself, but against other runners, nature and the mountain is the boss. ”

Also matches the father of this embodiment, the Italian Marino Giacometti: “Distinguishing mountain races athletics is not a matter of jealousy, but because requires organization and individual workouts. Desert racing, hill or mountain as forms of athletics today is confused. They are different things, and each must be in place. ”

But these races are not without controversy as some mountaineers doubts about the security of athletes and their environmental impact as fragile as the high mountain area. In this regard, Corless pointed out that there is control over these competitions and that currently there are no known major accidents. And it has ruled: “It’s a race that is not made to be safe, if not dangerous, and that’s what makes it interesting. People know and he explains. It is important to control this but there must be a responsibility of the rider himself who knows what risks will run. ”

The Secretary General of the Spanish Olympic Committee, Víctor Sánchez has moderated one of the most anticipated round tables of this international event, the Olympics and dedicated to mountain sports, which has addressed the potential candidates modalities to be included in games Olympians.

Financial support and sponsorship, together with environmental effects these disciplines could have on the environmental context in which they develop have been the most controversial aspects of the debate on this journey.

In this sense, we have addressed problems such as overcrowding scenarios, advantages and spectacular racing sprint ski mountain that would foster more audiovisual monitoring and promoting large scale of these sports.

Sanchez has acknowledged that the inclusion of new Olympic sports is “a dynamic return”, ie that there are rules to be deleted. He also congratulated the agents involved in the world of mountain gamble “firmly inclusion” and wished “good luck” to aspiring federations in this appointment process.

The escalation has been present on the second day and especially relevant was the testimony of disabled Urko Carmona elite climber who has opted to normalize the sport among people with disabilities: “All we need is effort. Climbing is a sport suitable for all ages and all audiences “.

In another vein UIAA, the international federation that brings together sixty national mountaineering federations, has maintained its second working session to discuss the guidelines that should mark sporting competitions this year and to be established in the General Assembly in Seoul .

The president of the Aragonese Federation of Mountain and vice FEDME, Luis Masgrau, has been very satisfied with the quality of both international and national conferences and stressed that “has generated an interesting debate on the clothing, the equipment, fitness, safety and organizations how they should be. ”

CIMA ends today with the economic approach of mountaineering will bring the Benasques businessman Carlos Barrabés at the conference opening at 9.00. After the role of mountaineering organizations will address the asset in the mountain tourism, security, the relationship between mountain and environment, communication media, and problems that encloses the unique peaks.